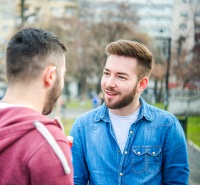 With Grindr and Scruff and Tindr and Growlr and other sites for gay chat, our next “hookup” could be just a couple hundred feet down the street (or inches away from us at the coffee shop where we sit to write this article). With so much sex going on, or at least the opportunity, can we rightly be called the “hookup generation?” On the face of it, perhaps. But who is that generation? Gen X? Gen Y? The Millennials?

“Everybody is using these apps. Including senior citizens,” said Jeromy Carpenter, a 35-year-old law student and writer based in San Francisco. He feels millennials are often slut-shamed by older people who see hookup apps as being too easy. “Oh, you millennials are a bunch of sluts,” is something Carpenter laughs at. “Because there’s a huge spike of STDs in retirement communities. Everyone using apps can be called part of the hookup generation.”

Historically, gay men searched out other men in a variety of venues. This was long before gay dating sites or even the term “gay” was on the horizon! In the 18th and 19th centuries, cities like London were known to have “Molly Houses,” private homes or taverns where men met for friendship, a few drinks, and of course...sex. The 2005 documentary “Gay Sex in the 70s” reveals a newly liberated world in which walking down the street could lead to a sex-filled day of pleasure. The arrival of HIV/AIDS forced many people to go at least partially back into the closet, repressing the sexually frank and open culture they enjoyed for one expressive decade.

Today, thanks to better prevention education and the availability of PrEP, it comes as no surprise that hooking up -- often through apps -- is on the rise. But how is this affecting gay culture?

“I do remember meeting people at bars,” said David Rowles, 39, a bit nostalgically. He is a performer and student from Philadelphia. “Gay bars are closing today. If you missed a connection, you would go back to the same bar or party next week hoping to connect with them. In those days if you went to a bar, if you stayed long enough, you were likely to get laid if you wanted it.”

Rowles finds certain aspects of the apps appealing. He doesn’t have to spend too much money going to an event or hitting up Philly’s “gayborhood.” He can hang out in his living room if he wants to hook up or look for someone he might be interested in dating. Unlike Carpenter, he doesn’t feel we can all be so easily lumped together as a hookup generation.

“Anybody who’s young enough to not have had the experience of meeting up in bars or events is more likely to fall under the banner of the hookup generation,” he said. Rowles added that the apps can be misleading or just a waste of time. “A lot of these apps are filled with lurkers.”

The ease of gay dating apps or hookup apps is liberating for some people. A small-town guy may be two or three hours away from the nearest gay venue. However, if he downloads an app, he may find a hookup, a friend, or -- given their mutual isolation -- an ongoing relationship, sexual or otherwise.

Additionally, someone just experimenting or wanting to experience sex with other men can comfortably pursue their interests in private. They can now do so without the ordeal of meeting in a public venue like a bar or even a more private place like a bathhouse, which may intimidate a novice. However, some argue that apps give closeted people the freedom to explore their sexuality without coming out.

Many others feel that the sexually open culture of the apps is allowing people to be public with their prejudices or inhibitions. Preferences often state “no fats, no fems” or “white dudes only” whereas meeting men face-to-face in a social environment may break down these barriers. This could allow that jock to go home with that twink or that “whites-only bro” to hook up with a person of color.

Ty VanHelsing, 29, is the recently crowned Mr. Gay Portland 40. I asked him for his opinions on the state of hookup culture. He is in a committed partnership these days but admits he found hookups convenient when he was sowing his oats. Portland is, I’ll add, a very social city. Proud of its cafe and bar culture, nightlife, and street festivals, it fosters venues where people will meet and greet face-to-face, celebrating their diversity openly.

Mr. Portland did go on to add about his hookup and app experience, “I was kind of able to weed out if there was someone I was not attracted to. Then, I could move on to the next. That sounds superficial, but that’s how it is. We become superficial in how we hide behind the screen of a phone or keyboard. I unfortunately fell into that category as well.”

It seems that the title and premise of this article present a loaded question for those whom I interviewed. While gay men can currently be called the hookup generation, we have always been that. For, in one way or another, we are “a generation that hooks up.”

Recently, I ended a five-year relationship. Oh, I downloaded the apps. My closest gay friends encouraged me to “get out there” as their form of gay dating advice. However, when I did finally hook up, it was the old-fashioned way: at a bar, after someone overheard that I am relatively new to Portland and originally from Philadelphia. My hookup lived in Philly for several years, so we had something in common which may have been missed on Grindr or Scruff.

Check out some of the most popular gay dating websites & apps that are out there.