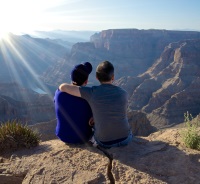 A new relationship, especially in the gay dating world, has many milestones.

First meeting (this is especially true if you met on a gay chat site or one of the gay dating sites).

Somewhere in between sex and lease, there’s first trip.

Here’s some important gay dating advice. Before considering a trip together, remember that in many relationships, there’s only one planner. That’s OK. Just be mindful of the fact that the trip is for both of you. It doesn’t matter who plans it or—if it’s a gift—who pays for it. You want to tailor it to both your tastes. If you paid, don’t remind him of the investment if he despises continental breakfasts. Likewise, if he planned it, be considerate of his efforts. Plan surprises, even if it’s just popping his favorite champagne while he’s in the shower.

I chatted with Paul Hagen, a dear friend of mine, about taking a first trip together. Paul is a writer, editor, and radio personality based in Brooklyn, NY. He loves traveling with his partner, Justin. Soon after they got together, Paul won a dream vacation to the Ice Hotel in Northern Sweden.

“I knew Justin loved to travel, and we talked about going away together early on, but he started a new job at the beginning of our relationship,” he said. “So, we wouldn't be able to take advantage of the Ice Hotel package for a while.” Fortunately, they were still together a year later.

The reason I place first trip before first lease is because you really get to know a person when you’re both living out of a suitcase. Unexpected itinerary changes can befall the best of plans. Perhaps we learn the most about our partners when things go awry.

“It was a multi-destination trip. First, we landed in Stockholm, then went up north for the Ice Hotel. In the dead of winter. It really frayed my nerves. I had a few moments where I freaked out. Once in Stockholm, we crossed about five bridges to get to the Absolut Museum,” he said, only to find it absolutely closed.

“The other freakout was at the Ice Hotel, when they were transferring our luggage from cold to warm accommodations. I was worried about something in my luggage. Imagine me, filling the whole North Pole with panic? However, I discovered Justin's patience was incredible.”

What’s more, Paul developed a migraine on the flight to Sweden. “Truly, the fact Justin still wanted to date me afterwards is proof he’s a very special guy.”

Going back to the idea that a trip should be for both of you, it’s important to consider both your personalities. While Justin could travel “all the time,” Paul gets lots of fulfillment from writing and other projects at home. It comes as no surprise that their travel photo ops are quite different in style.

“From early on, I made fun of the fact he took what I call postcard pictures, without him or anyone in them. I treat all destinations like a photo shoot,” explained Paul, who is known to bring and distribute costumes on beach weekends. “It was push-and-pull at first, but we found a happy compromise.” 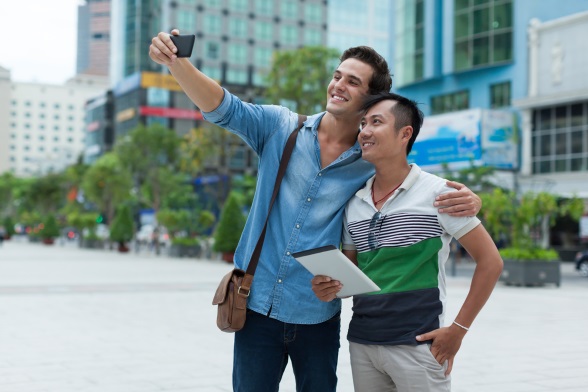 As in life, compromises happen on vacation. When Paul learned there was a bar that didn’t require outerwear indoors at the Ice Hotel, Justin humored him one evening. For Paul and Justin, who are now engaged, their first trip was an indicator of getting to first lease stage.

“At times I wondered whether we’d function well living together, cut off from my large, boisterous circle.” Paul admits he’s sometimes a lot to handle, while his partner is more laid-back. “As it turned out, when I wasn’t distracted by a million other things going on, Justin was able to open up and be more expressive.”

The key to any successful weekend getaway, beach house rental, or even summer-long holiday is to really make sure the plans satisfy both your wants and desires. If your partner likes deluxe hotels but it’s an AirBnB kinda’ budget, plan a spa afternoon. If they’re a foodie, plan to hit up local deliciousness. If you have a dog, call a pet sitter. It’s not the time to book a pet-friendly hotel. You want the focus to be on the two of you.

While the relationship may be sexually healthy, he may not wish to spend a long, sexy weekend in an isolated cabin. However, make sure there’s time and energy for sex. Rushing from one new experience or outing to another can certainly drain your sex drive. Yes, even on vacation. Yes, even to gay men. Yes, even to you.

If you’re looking for a sexy travel companion of your own, check out some of the top-rated online dating sites.