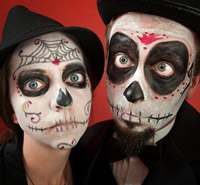 Back in 2006, I was dating someone fairly seriously. He was a lot more reserved than I was in social settings, but he had a wicked sense of humor (not Boston “wicked,” more like surprisingly sneaky wicked) when the two of us were alone. His unassuming nature made him even funnier to me! So, when Halloween rolled around, I knew that I wanted us to dress up as a pair. I proposed that I would be a Mounds bar and he would be an Almond Joy... and the back of his costume would say “I have nuts” and mine would say “I don’t.” I have no idea if I liquored him up beforehand or what, but he somehow agreed to this, and it was a complete hit! (I made the costumes myself, by the way, and have yet to find another guy to wear it with me. ;))

We all know what holiday is coming up on October 31st, and if you’re dating someone new, it’s hard to know what’s appropriate as a costume for you as a couple. Last year, I talked about what to wear and what not to wear on a first date. A few weeks later, I revealed what your Halloween costume really says about you, whether you like it or not! This Halloween, I want to take things one step further to talk about the top 10 couple costumes for new couples. 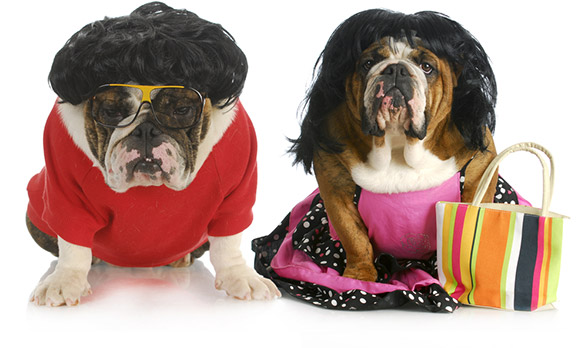 The best costumes are the topical ones. Sure, Trump might get punched and spat on throughout the night, so use this one only if you have a thick skin (or mask, as the case may be). It’s sure to be a fun time, though, and your friends might even moderate a debate for you two crazy kids!

One person wears a Netflix logo and perhaps has some old-school DVDs attached to him or herself, and the other has an icicle affixed to his or her shirt and carries a bottle of beer around all night (as if that’s such a burden).

This one’s pretty easy since these are two discrete costumes that can stand alone. When you put them together, though, you’ll be sure to get a few “awws” throughout the evening.

This is a pop culture reference that I don’t see getting old. As long as your skirt is short and his outfit matches (sans the skirt, plus some pants), then you just need to make a “Spartan” sash to finish off the outfit… and break into random cheers at any party you attend.

Oh, that mustache, the long hair, the bellbottoms, the unnecessary chest hair, and maybe even a reference to Auto-Tune, and you’ve got yourself a costume.

I don’t know about you, but growing up, I was addicted to my Nintendo… and I still own (and play—no judging) my original NES. These will likely have to be costumes you buy or rent, but perhaps at the end of the night, Princess Peach will give Mario one big kiss if he comes to her rescue.

Like #3, the rabbit costume is similar to the cat costume. Just switch the type of ears, and add a cotton tail, and you’re in business. Just don’t forget the black top hat, or else we will never know where the rabbit came from!

Only choose this idea if you’re prepared to wear the entire Canadian tuxedo (head to toe denim). It’s a look all right. Denim underwear optional.

Very sadly, the woman at the center of this photograph, Greta Zimmer Friedman, passed away recently. The photo is from V-J Day (Victory Over Japan) in 1945. He wears a sailor costume, she wears a white dress and white Mary Janes, and together, they use every opportunity to emulate that famous kiss throughout the night.

To make this one even funnier, have the guy dress up as Dorothy in the blue and white dress, carrying a basket, and have the lady dress as the dog.

So there you have it. Try out one of these Halloween costume ideas and check back with us for more holiday and dating fun.