15 Reasons Why Y'all Should Date A Guy From Texas 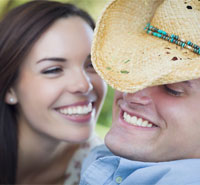 There’s something about a cowboy hat, a slow drawl, and sunset on a prairie that never loses its charm. The modern man may have his suits and briefcases, his perfect hair and clean shoes, but every now and then a girl wants some of that old-fashioned, home-and-hearth romance, that still lets her be who she is. That makes Texas the perfect place to find a guy.

Yep. Here are 15 reasons to date a guy from Texas.

Yes, there are still men walking around in cowboy hats and tan leather boots; riding into the sunset is more like regular exercise in Texas. Best of all, there's a whole lot of that gritty romantic sense that makes the oddest date better than a candlelit dinner.

2. You’re Allowed To Be Feisty

Now how ‘bout that? You don’t need to faint all over the place, even if you were looking for some old-fashioned romance. The best thing about dating a Texas man is that they’re more than used to cowgirls. So you don’t have to worry about scaring anyone away.

3. Can’t Stop Them From Being Gentlemen

You can’t scare them away by being your outspoken, crazy self, but you can’t stop them from being gentlemen either. What girl doesn’t like a man who insists on opening the door for her? Or receiving flowers on the first date? Or pulling out her chair? Sure, you can do it for yourself, but it’s their way of saying they care...and it never gets old.

4. Yes, Going Out To Football Is A Legit Date

Maybe you’ve been bummed before because your date never asked if you wanted tickets to the NFL playoffs...he just assumed you wouldn’t want to go and went with his pals. That’s not a problem in Texas. He’ll assume just the opposite, and you’ll date at every tailgate party and game. To really win big points, check out detailed online dating profiles like the ones provided to Match users, to see what teams he likes.

5. Can’t Stop Them From Being Protective

There’s no feeling a girl likes better than seeing her man stand up for her. Your Texan date won’t disappoint you. You can bet nobody will ever mess with you again. Watch them run!

6. The Rodeo Is Also A Legit Date 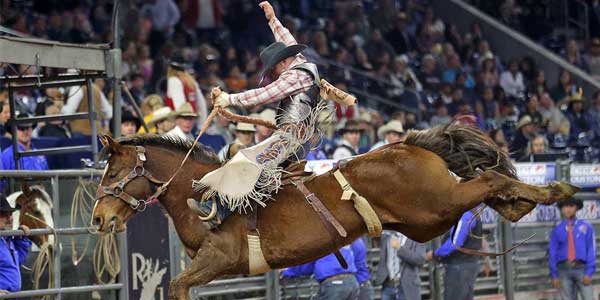 And yes, there are still rodeos in Texas. There is nothing so romantic, or primal, as seeing men and women fighting to master those wild horses. After all, that’s what gives cowboys their charm: their stubborn refusal to give up.

7. Can’t Stop Them From Being Loyal

If you were to choose one reason to date in Texas, it would be this. These men are as loyal as they come, and you can’t keep them away. Don’t worry about being forgotten by these guys. When they set their sights, there’s no way they’re going anywhere else.

8. Stargazing Is Also A Legit Date

While dating a guy from Texas has numerous benefits, possibly one of the more romantic is the fact that rural Texas offers something most girls don’t get to experience--stargazing. There are few things more romantic than stargazing with a Texan, especially if he knows how to strum on a guitar.

9. You Don't Have to be Afraid to Eat Big

It is a cliche, but everything really is bigger in Texas--from the food portions to the appetites. Women often feel the need to timidly eat around men on the first few dates, but if you are on a date with a guy from Texas this won’t be a problem.

10. They Have Sexy Accents

One of the hardest things for an actor to nail is a southern accent. So often they are botched on the big screen by big names. The reason that so many try is because they are downright sexy. If an accent is a must for you, most online dating sites now have advanced chat features, like the Date Smarter app from Zoosk, that allows you to see just how handsome they are and hear their sexy southern accent.

Men from Texas are generally closer to their families than men from most states. This is another attribute that stems from their fierce loyalty. The fact that they are so willing to think “family first” with theirs means once you create your own, family will continue to be the most important aspect of his life.

Unless you date Texas men a lot, you have no idea what you are missing. All guys from Texas know how to cook. From short ribs to fine cuisine, dating a Texan is the next best thing to hiring a live-in chef.

13. Most Guys from Texas Are Good with Money

Texas has the 11th largest economy in the world for a reason: it is because Texans are good with money. Dating a Texan will ensure that you’ll be wined, dined, and financially secure. (Did I also mention how generous they are?)

14. Manners Are Still the Norm

Guys from Texas all have manners. From the courteous hat tip greeting to elbows on the table, chewing with his mouth open, and being rude to waitstaff and hostesses, these are things that will never happen when you date a guy from Texas. From sunrise to sundown, manners run through the blood of all Texans.

15. They All Aspire to Be Walker Texas Ranger

Chuck Norris is one of the most respected figures in the world, certainly in Texas. Every man envies him, and every woman wants to be with him. For this reason, the men of Texas are held to a higher standard. While every man you date probably won’t have a sexy, red beard, they will exemplify the respect, compassion, and courage of Chuck Norris, Walker Texas Ranger.

Convinced that you need to find a Texan to make your own? Get started today with this comparison of the leading online dating sites.

Our editorial staff is comprised of writers who are passionate about the world of online consumer services. We specialize in simplifying the process of choosing the right online dating site for your needs.